SO, a portfolio then. Something of a presentation of what I'm doing. Where to start?

I'm very flexible in my work with a neverending interest of trying out new things and learning more. Not very interested in highpoly rendered scenes or that kind of stuff though, only things to be used in games.

Currently I'm using 3d Studio Max 2012 and Photoshop. I'm still experimenting with different programs for learning sculpting and baking highpoly normalmaps. But at the moment I'm pretty hyped about the brand new NDO2, which is a powerful plugin for Photoshop to be used for creating normalmaps either on the bitmap or directly on 3d-objects. Seems very cool and fairly easy-to-use in an environment I'm already very used to. I'll have to get back to you on this later!

The best and most up to date example is no doubt a project of mine called "Swedish Army Mod" (SAM) for the game ArmA2 and soon VBS2 and eventually ArmA3 next year. I've been running this with a few friends for almost 2 years now, and it's been quite a ride through different stages of my learning-curves in many areas. I'm mainly responsible for 3d-models and textures, but also handle character-animations, some implementing and media. Most of my work here is still very WIP, but at least it proves I'm capable and understand the whole process from creating a model to having it ingame with textures and animations, eventhough this isn't Skyrim. It's just a matter of spending a few days learning particular tools for implementing

As for Skyrim, I've started off with texture-mods (Like everyone else). I currently have my own small project "Tobes Highres Textures", where I'm mainly focusing on retexturing clutter and furniture (Apparantly I have quite a lot of competition on this area right now). Trying to be true to original textures, with a few exceptions where I dont like the originals at all. This of course also include matching normalmaps and proper speculars.

This project is also a part of the upcoming texture-pack "Skyrim Pretty Pack", but anyone is allowed to use my textures if they want to. Just as long as I'm notified and given proper credits

I have quite some experience in modding Oblivion, so I'm very familiar with how things are structured and work with this Gamebryo engine. The Creation Kit will probably not be so very different to work with compared to eariler versions of CS.
I did a lot more wip/personal stuff than released stuff unfortunately, but I managed to dig out some old screenshots from my NAS

"Tobes House" is a classic, and people are nagging about a new version for Skyrim as well

A very simple but cosy player-owned house with a great location and view. No neverending halls of display-cases, mannequins or cheating alters here.

Also worth mentioning is a project I started working on, which I used for my own gaming during development, but never managed to finish for a proper release. It was supposed to be a vampire castle hidden inside a mountain, owned by a more proper vampire clan compared to the traditional Oblivion vampires who lived in filthy caves and ruins, greatly inspired by the Underworld-movies. Players who were vampires could earn a resident here, and enjoy the clans resources/shops, feeding-chamber, sadistic parties and an arena where they could fight werewolves. Quite an awesome idea, but turned out to be way too ambitious for one person (I'm stubborn like that)


So I'm hoping to find the time to at least create minor things or help people for all kinds of projects, while also sharing whatever I make on my own with anyone interested. Of course I'm also hoping to learn a thing or two myself around here

Most of you guys seems to have a lot more knowledge than me especially regarding 3d-creation. I'm always open for criticism and suggestions!

what im most impressed by is your ability to stay true to the original design, and it dose look like it was the original art design only a HQ texture:P that's no small feat. well done
and we are always interested so please do share

Staying true to original textures is a kinda hard line to follow, especially when most of them have been so compressed you can barely see how their original details and contours once was

So people seem to have quite variating opinions of how these "new" details should look, but I try to follow my own vision and logic on this matter.

In some cases I take more drastic choices of re-designing, as all originals doesnt always seem natural or logic. The barrels for example, when I was making the texture for that crappy type of barrel, it hit me that the two ropes (Or whatever it is) holding the wood together made absolutely no sense at all, so I changed it to some very rusted metal instead. And as these barrels are often placed in pretty fine homes and inns, I though they deserved a slightly better wood too, but still with a rough low-class/outdoor feel to it that would fit in all kinds of environments.

Oh well, it's fun to mess around with nonetheless

(Brightness has been adjusted since this wip-shot) 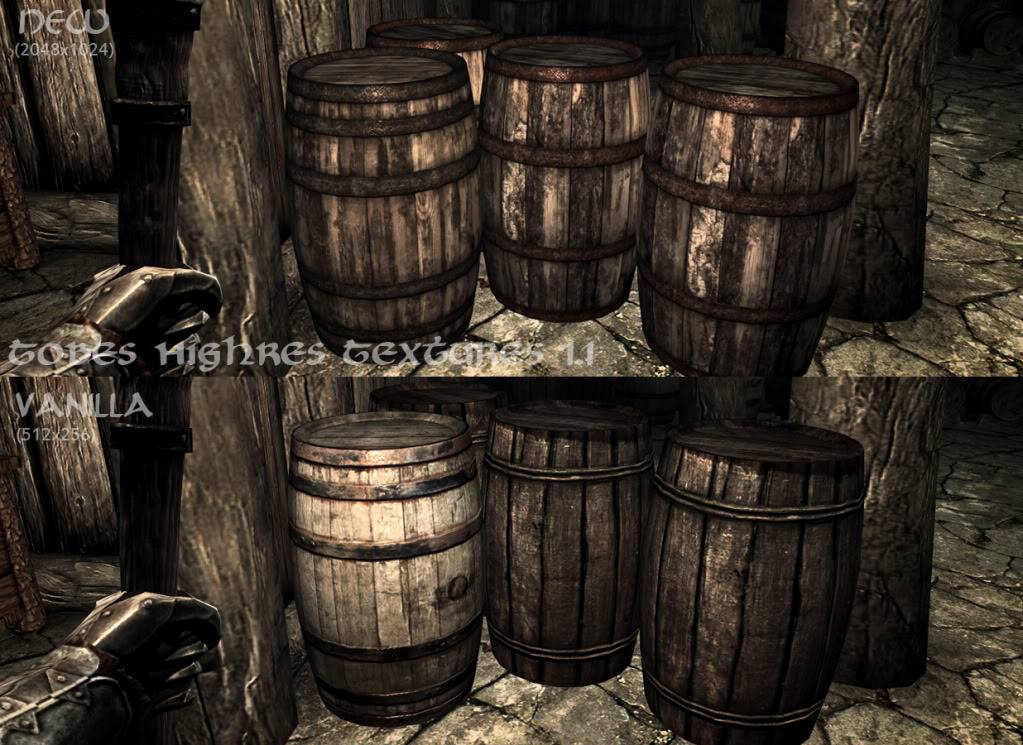 I like how you changed the barrels so that the difference between "clutter" and "container" barrels is more subtle, but still visible. When you say brightness is adjusted, I hope you made the wood less rotten-looking?
_________________
Don
My voice acting info: http://www.thenexusforums.com/index.php?/topic/466651-collection-of-voice-acting-talent-c-vat/

Welcome :] and awesome work, yes NDO is an amazing pluggin, have you seen Thiago Klafke's making of DM_Zest? he intergrated it into his normal map workflow and had some amazing results http://www.thiagoklafke.com/makingofdmzest.html
_________________ 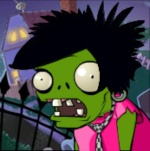 runestyr wrote:I like how you changed the barrels so that the difference between "clutter" and "container" barrels is more subtle, but still visible. When you say brightness is adjusted, I hope you made the wood less rotten-looking?

Heh, I actually didnt even have a clue about one barrel being a working container and the other only being clutter until someone mentioned it in my comments. Barrels mostly just contain food, so they're quite uninteresting ingame even for a thief-character. I'm still certain I've seen both of them being used as containers though.

The wood is not rotten, it's just some worn bark on the low-classish one

But it shows a lot better ingame and in brighter light. Here's the original texture. But yes, that one in particular was quite more brightened. I have a tendancy to use a bit too much contrast sometimes cause I simply like that style to it. But it's better to let FXAA Injector deal with this in Skyrim instead for personal use, and keep the textures fairly neutral for anyone downloading.

DiGiTAL ZOMBiE wrote:Welcome :] and awesome work, yes NDO is an amazing pluggin, have you seen Thiago Klafke's making of DM_Zest? he intergrated it into his normal map workflow and had some amazing results http://www.thiagoklafke.com/makingofdmzest.html

Thanks! That's indeed a quite nice workflow he did there. I'm using very similar techniques, but still need a lot of experimentation and learning to get better and more defined results. Still beginning with colormap, and then making a copy of that psd-file to adjust all my original layers into something that would generate a good and matching normalmap and specularmap. Feels a bit clumpsy, but NDO will hopefully change all this soon (Havent bought it yet). But I like his rule of thumb about not going bakin' if it's better/faster done in Photoshop

Mudbox and Zbrush is harder to get a long with.

Mr. Bravo wrote:Barrels mostly just contain food, so they're quite uninteresting ingame even for a thief-character.

Ahh. See, I pick up everything. I'm not even out of Helgen and I've already added 1000 pounds to my carrying capacity via the console.

And once I discovered that cooking (turn food into low-power healing expendables) was one of the few in-game actions that does not raise any stats and level before I was ready, I was even more interested in collecting whatever food was lying around.
_________________
Don
My voice acting info: http://www.thenexusforums.com/index.php?/topic/466651-collection-of-voice-acting-talent-c-vat/